The Grandmothers Campaign is an initiative of theStephen Lewis Foundation.

From the Remembrance Day insert of the Comox Valley Record, October 29, 2020

Joyce Jay isn’t one to shy away from adventure. She wanted to celebrate her 100th birthday by skydiving. Even a helicopter ride over the Comox Glacier would have sufficed.

Joyce Jay with 2 sons and a felted giraffe

Her family instead arranged for a ride along the coast on the back of a Harley Davidson.

The Comox woman, who turned 103 on Oct. 18, has lived through two world wars and two pandemics, the Spanish Flu and COVID-19.She broke a hip at the age of 102, but that hasn’t stopped Joyce from continuing to pursue her lifelong passions of painting, writing and creating felt art work.

Born in 1917 during the First World War, Joyce was just three weeks old when her family moved from London, England to the countryside in Essex at the Thames Estuary. The move had been prompted by a Zeppelin raid.

“We lived in a 16th-century cottage in my childhood,” Joyce said.

As a young woman, she joined the British underground movement when Winston Churchill assembled his secret army.

“They thought the Germans were going to invade, so we had to prepare for it. We had to get across the country without being seen. When the moon was out, we had to black our faces so that we couldn’t be spotted easily. It was all very secretive. We didn’t really know what we were carrying or what messages we were giving, but we were linking up across the country so that we could tell if the Germans had landed. We could tell them (Secret Service in Europe) where they were and what they were doing.”

During the war, in 1940, Joyce married her husband Ted. She remained in England while Ted was stationed in Burma. While he was away, she gave birth to their son Edward, who “spent most of his first year in shelters and under furniture to keep away from the bombing,” Joyce said.

She continued training in the resistance until Ted returned from Burma. By that time, Ed was three years old.

Interestingly, Joyce was three years old when her father returned from the First World War.

“My dad was in Mesopotamia during the First World War,” she said. “That went on for five years.”

Ed said her father came home in 1920, two years after the war in Europe had ended.

“Two of his brothers were also in the war,” said Ed, a career transport pilot in the Canadian Air Force who was a squadron leader in Comox. “One of them died in France in the trenches, and the other one was wounded, so that was part of her early childhood situation.”

After the Second World War, Joyce and Ted at first had trouble moving overseas due to his health.

“He had two air crashes, and eventually we applied to come, and came to Canada (Toronto) in 1957.”

In 2002, when she moved to the Comox Valley, she says “I tried to conquer every kind of craft that our ancestors used to do. I think the only thing I didn’t do was tatting, which is making lace…I did a lot of felting for the (Comox Valley Glacier) Grannies. Now they’re making masks.”

Many people have inquired about the secret to her longevity. She surmises the water in her childhood village had something to do with it.

“People used to come from all around to drink it, and I was brought up with it.”

Her doctor has linked her long life with living through two world wars, suggesting that adversity provided stamina.

“It (war) just became a way of life,” Joyce said. “I still had that awful feeling when planes go over, waiting for the bombs to drop. It never really leaves you.”

Glacier Grannies' meetings are a time for the entire membership to get together to celebrate successes, plan upcoming projects, learn about the work of the Grandmothers Campaign, and enjoy friendship and refreshments. 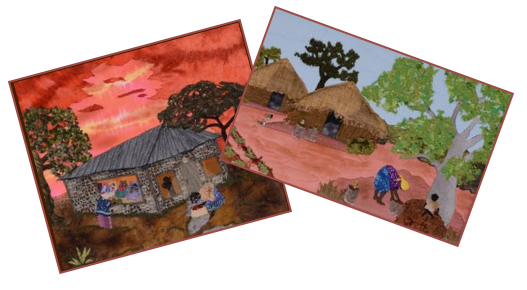 You are welcome to come to a meeting to find out more about us.

Glacier Grannies' meetings are a time for the entire membership to get together to celebrate successes, plan upcoming projects, learn about the work of the Grandmothers Campaign, and enjoy friendship and refreshments.

You are welcome to come to a meeting to find out more about us.